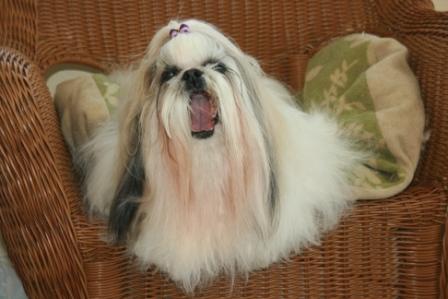 Chloe the Shih-Tzu has been coming to see me every two weeks for the past for the past... many, many years! She has a rather large following of secret admirers, including, but by no means limited to ''Teddy Bear'' Thornton, another Shih Tzu, who recently recognized her during a chance meeting in the lobby of Friendship Animal Hospital. Their eyes met across the room and it was... well, magic, as they say. For him, anyhow.

At Paws Chloe always reclines on her favorite pillow and when she wants something makes her wishes be known by aiming an intense stare at the person she would like something from. If she happens to want a treat, the stare has, as of late, become accompanied by a low ''wuff''.

In this picture she is yawning... oh the life of a Princess!